The title of this column is deliberate.

In November of 2015, I wrote about Andre Drummond, the Pistons’ enigmatic center, using the headline “Andre the Giant.”

Last fall, it was all there for Drummond, the 23 year-old man child with the fat contract.

He entered the 2016-17 season free from injuries, free from money woes and free from Josh Smith and Greg Monroe. He had just helped lead the Pistons to the team’s first playoff appearance in seven years.

Drummond was enjoying an almost father-son relationship with owner Tom Gores. By all public accounts, Drummond got along alright with his coach.

He turned 23 in August and was on the verge of becoming an elite big man in the NBA.

It was all there.

The Pistons haven’t had a truly dominant big man since Bob Lanier. Yes, there was Bill Laimbeer, a two-time champion, but Laimbeer wasn’t a prototypical NBA center in his day. If anything, he was ahead of his time, with his three-point range and other assorted jumpers.

Laimbeer could rebound, but he couldn’t jump over a matchbook. His prowess on the boards was based on positioning and angles rather than brute force and leaping like he was playing on a pogo stick.

Drummond can rebound, that’s for sure. But that’s pretty much all he can do with any consistency.

Drummond never took that next step this past season, which is going  to end with a disappointing, below-.500, non-playoff record for the Pistons.

Drummond had a lot there for the taking but he seized nothing.

A man of Drummond’s freakish size, paid to the max, ought to be The Man. He ought to be a fan favorite. The fans should be chanting his name.

Yet Drummond’s relationship with the fan base is chilly. He is hardly beloved. He’s often derided for his poor free throw shooting, which makes Shaquille O’Neal look like Calvin Murphy.

The big money he got didn’t help, especially since the optics are one of cause and effect.

The basketball fans in Detroit—however many of them there are—can pretty much take Andre Drummond or leave him. If he was traded tomorrow there wouldn’t be many tears shed. The outrage would be limited, unless the Pistons got rooked in the deal.

And that’s another thing. The Pistons can’t move Drummond now, anyway. If they tried they’d be operating out of weakness, and you never make a good deal that way. Other NBA general managers know what’s going on. They know that Drummond, at best, made no progress this season and at worst, regressed. They won’t take him off the Pistons’ hands just to help them out.

Drummond’s minutes sank by about three per game as well, and though that may have contributed to his drop in numbers, it’s also symptomatic of his free throw shooting ills. What so-called “star” player on any NBA team makes a coach nervous to play in crunch time?

Stan Van Gundy simply couldn’t play Drummond in key moments of games because of the fear of his big man getting fouled.

O’Neal and Wilt Chamberlain, both Hall of Famers, couldn’t shoot free throws, either, but they both succeeded at a better than 50 percent clip. It wasn’t automatic that they’d miss both shots. With Drummond’s 38.6  percent mark, a team would be foolish not to put him at the stripe.

It’s not just that Drummond is awful at the line, it’s that he doesn’t seem to care that he’s awful. He has scoffed at suggestions that he shoot free throws underhanded, as has been the trick for some of the game’s all-time greatest FT shooters, like Rick Barry.

But forget the numbers for a moment. The “eye test” should be enough to tell you that Drummond isn’t elevating his game. He doesn’t have that je ne sais quoi presence. He doesn’t provide a spark. You don’t feel like things are going to be OK for the Pistons when he’s in the game, like you did with Isiah Thomas and Ben Wallace.

Drummond can rebound, but that’s like praising a toddler for his ability to cry. Of course Drummond is going to grab his share of boards. He’s 6’11” and, for all his warts, the dude is athletic when he cares to be.

He just doesn’t always care to be. 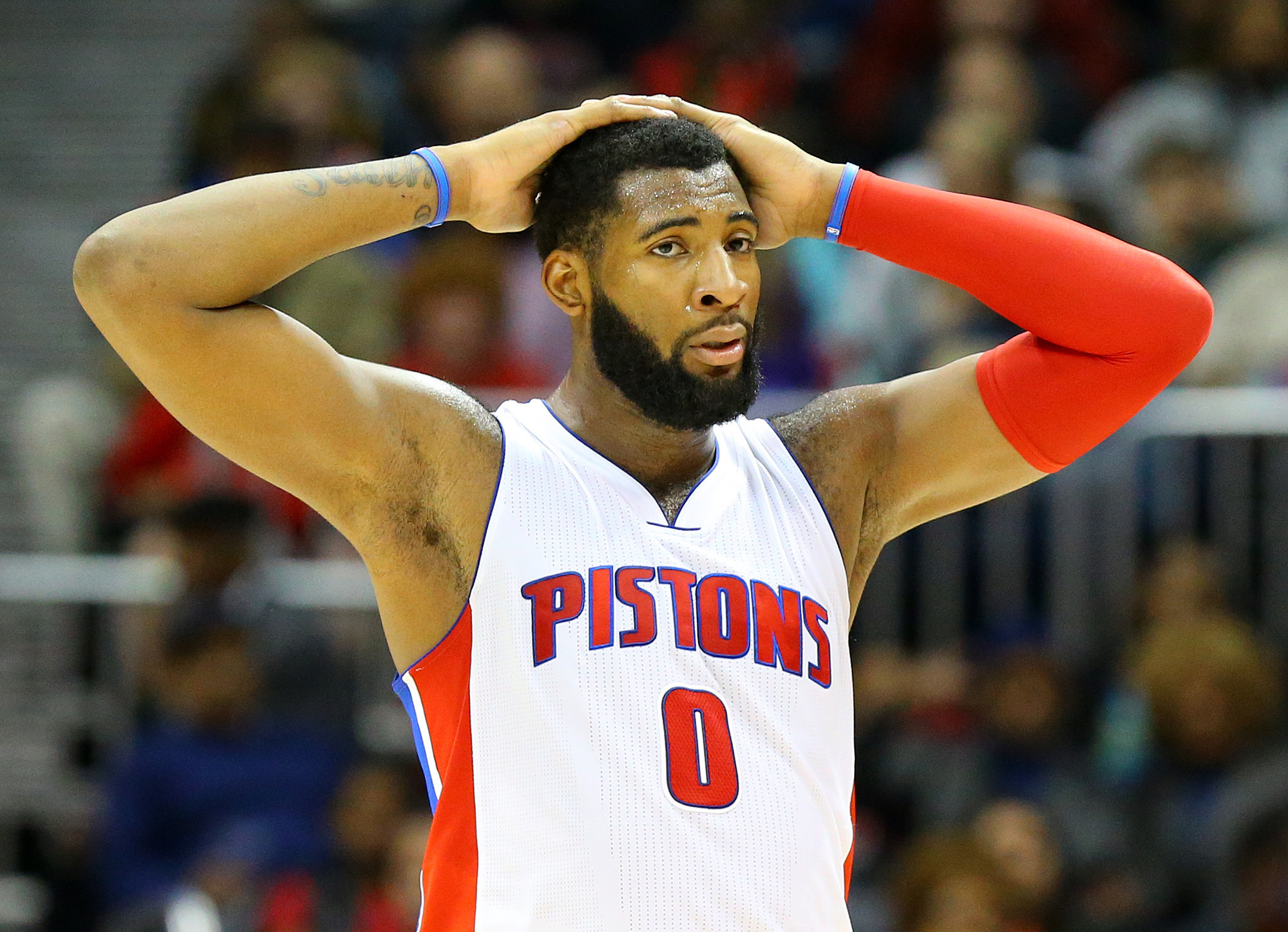 The game-ending sequence against the visiting Miami Heat on March 28 captures the Pistons’ season, and Drummond, in a nutshell.

With the Pistons leading by one, the Heat had the ball with about 11 seconds to play. With the clock winding down, there was a drive to the rim and a shot, which missed. Drummond, positioned poorly under the basket, failed to grab the defensive rebound that likely would have clinched the game. The Heat managed another shot, which also missed. Again, Drummond couldn’t even deflect the carom, which was converted into a game-winning tip-in by Hassan Whiteside.

Upon further review of the sequence, Drummond’s effort in those waning seconds left a lot to be desired. And he was called out on it on social media, which ironically is a platform where Drummond gives 100 percent all the time.

The loss to the Heat was a gut punch for the Pistons, who had their relatively realistic playoff hopes all but destroyed by the two-game swing, as the Heat came into the night just 1.5 games ahead of Detroit for the final playoff spot.

Instead of being within a half-game of the Heat, the Pistons fell to 2.5 games behind with seven games to play.

Was the loss entirely on Drummond? Of course not. But the Pistons’ so-called star big man had multiple chances to prevent it, and he failed, largely due to a suspect work ethic and poor fundamentals.

On Monday night, the Pistons said farewell to the Palace. A host of former stars and champions showed up for the festivities.

As one watched the Bad Boys title team of Isiah Thomas, Rick Mahorn et al, and the Goin’ to Work champions of Chauncey Billups, Ben Wallace and Rip Hamilton all taking their deserved bows, it was impossible to not be struck by the common denominator those two generations of champions share: mental toughness.

It was also impossible to ignore the obvious: that Drummond would have been out of place with those great Pistons of the past, and those players would have let him know about it, in no uncertain terms.

There’s no way to sugarcoat this. Andre Drummond is a soft player. Forget that he still doesn’t have much of an offensive game in the paint. Or that he lacks intimidating presence on defense. Or that his motor often runs on less than full throttle, which, by the way, was a knock on him in college.

The biggest indictment of Drummond is that he’s a big man who plays small. And not just physically. In fact, more non-physically.

Drummond should own Detroit. In a town that’s been crying for a basketball superstar to embrace for the better part of a decade, Drummond is blowing it. The fans, despite their venom, would love to love Drummond. He just hasn’t given them a reason to do so.

I don’t want to see Drummond fail as a Piston. He still has it all in front of him. There’s still time to ascend to basketball deity in Detroit.

The man is still only 23 years old.

But he started in the NBA when he was 19, so it’s been five seasons now, and you wonder when his full potential will be realized, if ever.

Drummond is pretty much the last man standing from the pre-Van Gundy era. The Pistons cleared out fellow big men Smith and Greg Monroe in order to give Drummond the paint job. They gave him the max contract. They gave him the keys to the franchise, essentially.

So far, all Drummond has done in return is spin his wheels.

What does he need to do, you might ask, if I’m so disappointed in him?

It’s not all that complicated. In fact, I can boil it down to five words.

You think any of those Pistons who were on hand last night at the Palace’s farewell ever faced that sort of challenge?

You think they ever needed to?