The veteran first baseman was wallowing. Approaching age 38 in mid-May of 1985, he had managed just two home runs and a .172 batting average in a tad over 70 at-bats. Darrell Evans looked every second of his birth certificate.

The Tigers had seen enough. The team was out west when they promoted young Mike Laga—a left-handed swinging, power-hitting first baseman. Just like Evans, except Laga was 13 years younger.

Laga was a first round draft choice in 1980 by the Tigers and had been working his way up through the system. Finally, with Evans on the verge of collapse, Laga was brought to the show.

It was plainly evident to everyone who followed and covered the Tigers that Mike Laga was being promoted to the big leagues to send Darrell Evans a message. I believed it then and I believe it just as strongly today.

The Tigers weren’t about to cut ties with Evans, their big free agent signing before the magical 1984 season. But they needed him to produce, and fast. Adding the 24 year-old Laga wasn’t a veiled move whatsoever. The meaning to Evans was clear: we think a kid can do your job just as well, if not better, than you can.

Laga had three cups of coffee with the Tigers in 1982, ’83 and ’84, but those were token appearances. In 1985, the Tigers were prepared to play Laga every day, if Evans didn’t get his you-know-what together.

‘You’re too old; we’re bringing up the kid’

Laga and Evans took turns playing first base and being the designated hitter. Soon, Laga was back in the minors.

Evans, the fire beneath his rear end lit, hit home runs in four consecutive games immediately after Laga was added to the roster. By the end of the campaign, Evans became the oldest player in American League history to hit 40 home runs in a season.

Laga, for his part in the Tigers’ plot to jump start Evans, went 6-for-36 (.167) before being returned to the minors.

The way Darrell Evans’ 1985 season began was a microcosm of how the Tigers as a team performed—or rather, under-performed.

Tigers fans are finally getting their wish soon. Two members of the 1984 championship team are going into the Hall of Fame: Jack Morris and Alan Trammell. For years, the baseball fans in the Motor City have cried foul about how no player from the 1984 ring bearers are installed in Cooperstown.

It’s not popular to say to those who wear the Old English D on their hearts, but I have a hard time looking at the 1984 Tigers as anything more than one-hit wonders. I also don’t think Trammell and Morris are Hall of Famers, but that’s another browbeating entirely.

The 1984 and 1985 Tigers had basically the same players at all the critical positions. Nobody other than part-time third baseman Howard Johnson was traded after 1984. No significant player left the Tigers as a free agent before 1985. The manager was the same, as were all the coaches except for pitching guru Roger Craig, who went off into what would be a brief retirement. He was replaced by former Cardinals pitching coach Billy Muffett.

The Tigers of 1983 won 92 games and pushed the Orioles until mid-September, and while the ’84 team was historic—with the 35-5 start and the wire-to-wire run to the pennant—the 1985 team fell flat on its face.

The 1986 Tigers petered out in August. The 1987 team (minus catcher Lance Parrish, who fled to Philadelphia) rebounded from an 11-19 start to win 98 games and the division, but flamed out in the ALCS.

It says here that if the 1984 Tigers had managed at least one more World Series appearance, the Hall of Fame voters might have been kinder to the team’s alumni.

But with a pedestrian 84-77, third-place finish in 1985, I believe some luster was lost from that incredible 1984 team’s accomplishments. Hate on me all you want. I believed it then and nothing has happened in the 33 years since to change my mind: the 1984 Tigers were an isolated incident.

Granted, it was a helluva isolated incident, but no matter how you slice it, going from 104 wins and a world championship to 84 wins and third place—never a factor in the race after July—doesn’t help the legacy.

Was there a hangover from 1984? That’s fair—but so many of the Tigers were in their prime, Evans notwithstanding, in 1985. This wasn’t the 1973 Tigers, redux—an aging team on its last legs after winning the 1972 AL East. 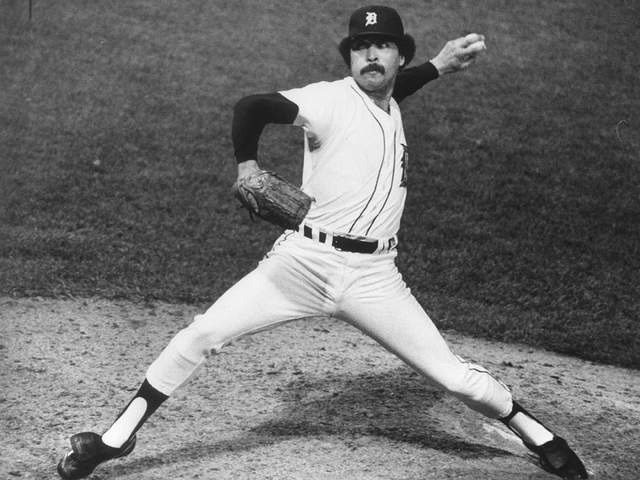 A popular theory was that Hernandez was tipping his screwball, which had worked wonders for him in 1984.

Rather than turn this into a SABR project, see for yourself. Click HERE for the ’84 Tigers team stats and HERE for those in ’85, to see where the 1984 heroes let the team down in 1985.

Manager Sparky Anderson, in his book They Call Me Sparky, wrote that he had a mostly miserable time in 1984. His reasoning? After 35-5, there was only one way the Tigers could go. At one point during the season, Sparky pointed to the flag pole in center field at Tiger Stadium and told reporters that if the Tigers didn’t win the whole shebang, that’s where the fans would string him up.

Conversely, the 1987 team remained near and dear to Sparky’s heart for picking itself off the mat.

In the book, Sparky said the 1985 team simply had a case of market correction. I think that’s a cop out, given all the talent that team had, and sells short the flop that occurred.

Morris and Trammell will have their day in Cooperstown next weekend, having found a loophole in the system, thanks to these goofy Veterans Committees—the appeals courts of the Hall of Fame.

But maybe this isn’t as much of an issue if the stars of the 1984 Tigers had been able to follow up their success with any semblance of the same in subsequent years. They had their day in the sun but they could have—indeed, should have—had more than just one.

If only they could have followed Darrell Evans’ lead in 1985 and gotten their collective act together for another run at greatness.

One hit wonders, those ’84 Tigers were. The truth hurts, don’t it?